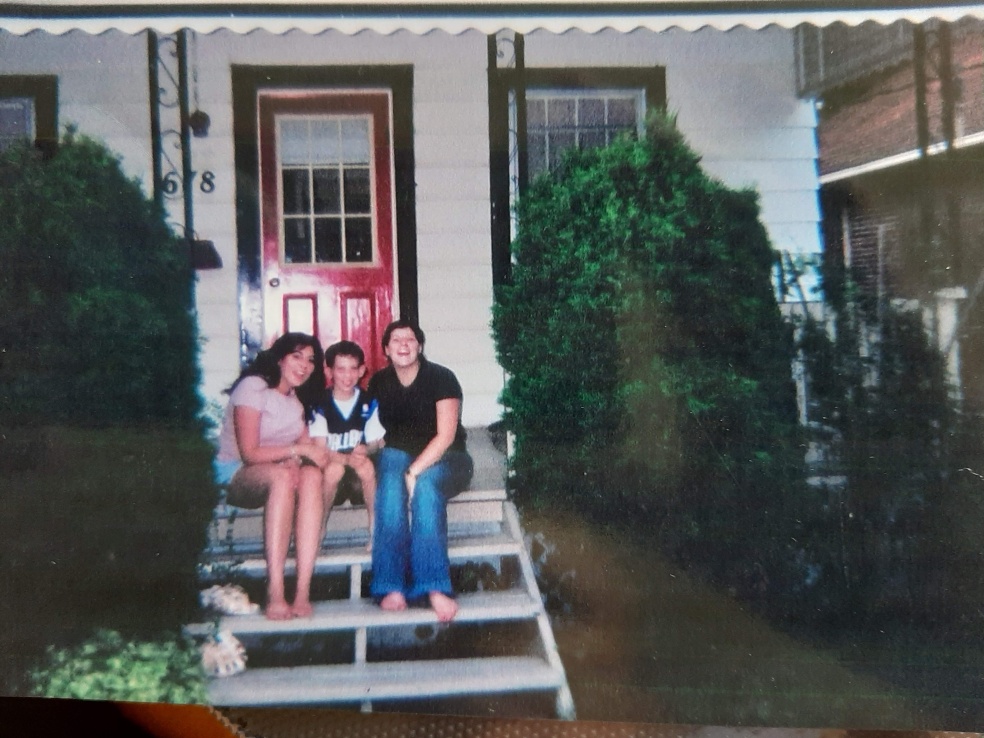 Raya, Tovah and I lived in a little white cottage in London, Ontario for 10 years. It was not fancy.  I couldn’t afford any upgrades but I also didn’t want any.  I adored our wee bathroom with the wood paneling that resembled a sauna and our tiny clawfoot tub that I could comfortably soak in because I’m only 5 foot 2. I loved our country style kitchen with no counter space and no fan above the stove.  Tovah was constantly annoyed with me for broiling chicken without closing her bedroom door making her room and her clothes smell of chicken.  It still makes me smile.

Early in 1990 I sold our 3 story duplex.  I couldn’t afford the repairs and upkeep on the house.  We rented a lovely 3 bedroom home in the neighbourhood. With the sale of the house, I paid off all our debts, bought a new (to us) car and we spent the whole summer in Norway.  That is another story for another time.  We were in the rental only a year when the owner put the house up for sale and the next year was spent with real estate agents looking at our home, open houses and all that entails.  A whole year of it!!

One day I was sitting in my taxi – yup, I was driving a taxi full time that year.  I just didn’t have the capacity to work in a normal workplace environment.  I needed a break from bosses, corporate culture and all the BS that came with it.  So I’m in my taxi and I say a prayer.  “God, I need a house that my girls and I can live in until they graduate high school.  It has to be in the South Secondary School district.”  South had a great reputation as one of the best high schools in the city with about 95% of the graduates going on to post secondary schools.  That was my goal for my daughters.  I opened up the newspaper (that’s what we did in 1994) and there was a little ad “Rent to Own”, 3 bedrooms, Old South.  I called immediately.  Where is the house located?  It was exactly where I needed it – within the school district parameter. I’ll take it, I said.  The owner asked if I had seen it yet.  Nope.  He insisted that I go and look first and call him back.  I was annoyed since it meant checking out of work to go look and losing money that we desperately needed.

I drove across town to find this adorable little white cottage.  I walked through to find 3 bedrooms, a living room, kitchen and a bathroom.  The basement was dry and clean and completely unfinished.  The backyard was ginormous!!! There was a long driveway and an old wooden garage.  Perfection!!!!!!!  I called him back and we arranged to meet at 4pm.  He told me the monthly mortgage amount – same as I was paying at the other house.  He said if I paid on time every month, he would get me a bank mortgage.  I found that very unlikely but a year later his wife cosigned for a mortgage and the house was really mine.  We lived there for 10 years.

The other miraculous thing he mentioned was that he knew we would want to paint and fix the house up so he would give me the keys right then and there.  We weren’t supposed to start paying for 2 months.  He said he didn’t live in town and he only asked if I was going to be there often to switch the utilities to my name!!  Later that day I called our landlord and gave notice asking if we could move in 1 month.  I had not put up a security deposit and there was no last month rent paid.  They called me back an hour later and asked if I would consider moving out earlier.  The end of the month was a week away.  I quickly agreed.  2 months without paying rent gave me the down payment I needed.  The next week was a whirlwind of cleaning and painting our new house, moving everything and cleaning up the old house.  I was working 12 hour shifts six days a week at the time.  My best friend Alice, Raya, Tovah and I became painters.  I bought our paint on the backroom shelf at the paint store for $5 a gallon.  Raya was about 14 years old and Tovah was 11.  We had our house and I had my miracle.  I chose fun colours – forest green for the living room, yellow for the kitchen, a green for my bedroom,  yellow in Raya’s and turquoise in Tovah’s.  A few years later it was evident that the colours were bothering Tovah and we painted her room and the living room white.  It was an instant attitude change for her.

It’s a rainy summer afternoon today and it just reminded of similar hot and muggy days in our cottage home where I would sit out on the porch under the aluminum awning (listening to the sound of rain) stretched out on a papasan chair that I probably scavenged from the street. I loved finding things out on the street and bringing them home –  I still love a good find.  “Is that garbage?” brought a smile to all of us.  I once embarrassed Tovah because I took old railway ties that were out in front of the home of one of her friends.  They were there to be taken but Tovah was having none of it. Mom, how could you do that??  I found a child’s swimming pool and dug out a pond using the railway ties as a little walkway to it.  Hmmmm, wish I had a photo of that. Eventually I spent money on a pond liner.  I put in some goldfish and just loved this space.  I also had a hammock.  Memories that I am recreating on my little balcony here in Toronto.  Memories that bring Tovah into my space and hold her in my memory.

I can feel her here today as I can feel the humid summer air on my skin.  I have chicken cooking on a little indoor grill.  I would often grill chicken on an old gas barbecue that I inherited but I would fill it with charcoal because I also have a fear (like my fear of birds) of propane tanks.  I love summer so much and I hate using air conditioning after spending most of the year being cold.  This was an ongoing argument in our little house.  One day I came home to find an air conditioner in the kitchen window.  My girls had asked their father for one and he had come over and installed it for them.  Both their bedrooms opened onto the kitchen and this gave them the cool air they wanted.  I closed the door between the kitchen and living room where my bedroom door was.  Open windows and a fan!!! Summer breeze!  Summer bliss!

One summer I bought an above ground pool that was on sale at Canadian tire.  The upper rim was inflatable and you only needed to fill the pool from the outdoor hose and it took shape and we had a nice sized 3 foot pool.  At night the girls and I would wrap ourselves in sarongs and go out into the backyard – no lights on – and slip into the pool completely nude.  We’d swim around, talk, laugh and cool off.  Then into the house for a comfortable night’s sleep.  The girls with a bit of air conditioning and me with fresh air from my window.

I remember one day I smudged the house with sage to clear the energy.  I don’t remember what was going on at the time but it felt like something that needed to be done.  I learned smudging when I had a contract facilitating a women’s group at the Oneida Community.  I have adopted it as part of my own practice since then.  Tovah came home from high school – the house was sparkling clean because that’s what I had been doing all afternoon.  Tovah was furious because she was certain that I had been smoking marijuana.  She wouldn’t believe that it was sage.  It’s funny because I don’t like marijuana (it makes me paranoid and is not fun).  There was no changing her mind or convincing her.  Tovah could have some very strong opinions.  For instance she was also absolutely certain that I ate raw ground beef. She swore she saw me do it!!   I never did but I did marinate steak and would eat it raw while putting it on the skewers to grill.  Just last year she was still convinced that I ate raw ground beef.

At one point Raya lost her wallet.  She looked everywhere.  We all looked for it but we couldn’t find it.  One early evening Raya came into the living room and asked if I would use my pendulum and see if we could locate the missing wallet.  I felt it was worth a try but didn’t have much faith in the process.  I spun the pendulum – clearing the energy and asking for guidance.  All of a sudden Tovah comes barreling out of her bedroom and runs into Raya’s room.  We here some crashing and banging and then Tovah yelling, “I found it!”.  She had the wallet in her hand.  She said that she was sitting on her bed and out of nowhere she could see the missing wallet in her mind.  It was in Raya’s room tucked back behind a solid wood bookshelf.  That was my magickal daughter.

I asked Raya today what Tovah would have been doing in her room.  I realized that kids didn’t have the electronics they have today.  Raya said Tovah would try on clothes, play around with make up, do her hair and that she was always listening to music and both singing and dancing.  That’s my Tovah.  Raya asked Tovah’s friend Heather the same question and she said that Tovah talked on the phone ( we had a portable one).  She remembered Tovah’s comforter – white with jelly beans on it.  She didn’t think Tovah spent a lot of time in her room.  We often watched television together.  We ate dinner together almost every day.  Raya, Tovah and Mom – we were invincible, inseparable and we always had each other’s back.