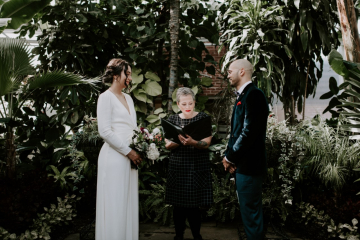 We had the honour and pleasure of having Sandra Ruch officiate our wedding ceremony and could not have asked for a more delightful person. She was very professional and easy to communicate with leading up to the wedding. She offered a great deal of insight and flexibility with the ceremony, especially since we planned our wedding in a very short amount of time. Her energy radiated and filled the room during the ceremony, and we laughed plenty. We also received a compliment from our photographer that Sandra was great at finding the perfect spots to be in/out of photos, which is a skill I never expected! She surpassed all our expectations and we loved working with her. We would absolutely recommend Sandra for all your officiating needs! 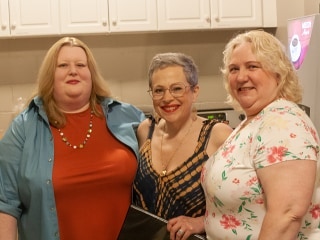 Sandra Ruch was everything, and more we thought she would be. Our ceremony was personable and fun. We had an island theme and she dressed for the part. She had everyone’s attention and several people told us after the ceremony that they even cried, with how beautiful it was. We had a cross section of family and friends at our wedding and EVERY single one of them commented on Sandra’s officiating. Thank you Sandra! With much love….Alice & Melanie February 2020

I’m grieving. I judge my grieving. Is it enough? Is too much? Will I spin out and lose control? For the first few weeks after my precious daughter died of cancer, I could only tell people, “I am broken”. I felt disbelief, loss, confusion and I was just so, so, so sad. Just sad and lost. I have been trying to find my way out – who will I be? How will I be? What will help to heal my heart? Who do I need? What do I need? What can hold my attention?

I never had a long attention span but since she died, it is even shorter. What can I do to honour Tovah’s memory?I created a memory wall in my home. It is here that I stand each day recite the Mourners Kaddish (prayer).I planted 18 olive trees in Palestine in Tovah’s name. You can do that too https://zatoun.com/trees-for-life/

Tovah and I had so much faith that she was not going to die. We believed that a miracle would come. She told me every day that she felt her soul was in her body and that she didn’t feel like she was dying. I believed her with all my heart. We prayed every day. We wrote out our gratitudes every day. I wrote sigils on her that symbolizes healing.

I understood we would have a long recovery ahead and that her health would be precarious but I believed that she would live. This was not how it was supposed to be. Tovah lived only 4 months after her cancer diagnosis. I’ve lost my baby girl and I miss her so much.

Tovah had a generous heart. She loved helping people and we know this for sure from the stories her friends continue to share with us. Tovah gave money to causes and she would often come to me to help her with a friend in need.

Recently an old friend contacted me and explained that he doesn’t have the money to send his daughter to university. We met 15 years ago in Jericho and have remained good friends ever since.My first time in Jericho spring 2005.

His daughter, Alaa, has dreamed of becoming a doctor for as long as she can remember. She and I had a video chat last week and I immediately knew that I wanted to help her. I felt a deep internal call to do this – I know Tovah would get behind me.

I am calling it my Tovah Project. I want to raise money to send Alaa to university. She graduated with a 94 % average. She’ s sweet and shy and smart!I set up a new bank account and I named it Tovah’s Project. I will send the money directly to the university in East Jerusalem. Alaa will live at home and commute. She lives in a refugee camp near Jericho. She needs $4000 USD immediately for the first 4 month semester.

I lived in Haifa from 2004-2006. The situation in Palestine was very bad then and has only gotten worse over the past 14 years. So much worse and the opportunities for young people are very, very limited. The Occupation crushes the hopes and dreams of Palestinian youth.

I remember the day Tovah and I talked about the situation one day in late 2004 and I explained what I was learning about the situation of the Occupation and the brutal actions of the Israeli government to the Palestinian people. I told her about the organizations I was now working with. A few months later, I told both Raya and Tovah that I was called to stay and that I wanted to continue working to end the Occupation and to help the Palestinian people. I remember how supportive they both were..

I hope you will help me to help Alaa. She will make a difference and so can you. No donation is too small. $5, $10, $100. A share is as good as a donation so please repost the link on your social media. GoFundMe Help to Send Alaa to Al Quds University